skip to main | skip to sidebar

The Key To be Good - Practice!

After long day of work, I still need to exercise my fingers and mind for hours late night in order to "Keep Fit".

My Resume in Chinese
Posted by Yap Ling 叶凌 at 4:45 PM 5 comments:

For Latest News About Me...

For latest news about me please

An Enchanting Musical Evening (With the Yap Family) 新春音乐会 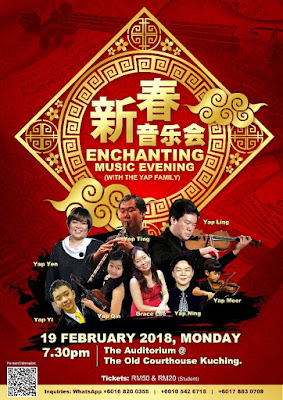 In conjunction with the Chinese New Year Celebration and family get together the Yap Family is organizing the “Enchanting Musical Evening” on Monday, 19th of February at The Auditorium of the Old Courthouse, Kuching at 7,30pm.

This enthralling concert was envisaged for many years by the Yap siblings and our families because we all love music and perform regularly.  The concert will feature Yap Ling, Yap Yen, Yap Ting, Yap Ning, Grace Lee, Yap Qin, Yap Yi and Yap Meer.  There will be special appearance by guest pianist and arranger Eugene Clifford Roland Suboh.

The primary objective of this concert is to share what we all love with as many people as possible and at the same time having fun collaborating together in the name of music. Even though most of us are avid performers, this is the first time we come together to put up a concert because it is not easy especially when we are all staying far apart.

With a friendly program repertoire to all audiences, the concert program includes a variety of combination in term of number of players performing and also the genre of music.  It is tailored to suit your indulgence.

We hope and look forward to seeing you at the concert with your family and friends.  We would appreciate if you could forward this messages to your circle of friends and help us to promote.

Yap Ling is a versatile musician who performs, teaches, conducts and arranges music.  His professional training from Royal Academy of Music, London (RAM), has taken him to many countries including USA, Australia, New Zealand, Dubai, Russia, Asian and European countries.  In 1997 he was conferred an Associate of the Royal Academy of Music (ARAM) by his alma mater in recognition for his contribution towards developing the music standard and promoting music in this part of the world.

In 1990, he participated in the 1st World Youth Music Camp in KL and the 1st Pacific Music Festival in Japan (under the baton of Maestro Leonard Bernstein). He represented Malaysia as a violin tutor in the 1991 ASEAN Youth Music Workshop in Jakarta, Indonesia. He was a string tutor at Universiti Malaysia Sarawak (UNIMAS) and Universiti Malaysia Sabah (UMS) where he conducted their orchestras. He was the Artistic Director and Principal Conductor for the 1st and the 2nd Sarawak Music Camp in Kuching and Sibu respectively for 1999 and 2001, the 1st Sabah State Music Camp at University Malaysia Sabah (UMS) in 2009.

Yap Ling is the conductor and founder of Jesselton Philharmonic Orchestra (JPO), Kian Kok Youth Orchestra (KKYO), the Tshung Tsin String Orchestra, The Kota Marudu Skycommunity String Orchestra and the Kota Kinabalu String Music Festival for the past 5 years, which includes the Outreach Teaching Program he started that enables teaching of strings instruments to the orphanages and hostels in Kota Marudu Skycom, Tuaran Jireh Home, Papar Care For the Future Malaysia, Tawau Vision Schools, Yangon Ywama Baptish Church Orchestra and the Bangi PLPP Orkestra & Koir (for the physically handicapped). To date, more than 150 students are receiving free tutelage under his leadership.

He has conducted Violin Masterclasses and Violin Teacher Seminars for ABRSM in Malaysia and regularly gives violin masterclasses and orchestra workshops throughout the country.  Last year, he was invited by Nanyang Academy of Fine Arts, Singapore to give a talk and to conduct string masterclasses. Presently he is the assistant conductor and violin tutor for the Permata Seni Muzik (PSM), a national program for musically gifted children below the age of 14.

As a Guest Conductor, he conducts the Miri Orchestra and Choir (MOC), The Musica Sinfonietta, Penang and The orchestra of the Music For Our Young Foundation, Hong Kong. He also co-founded the annual Bintulu Music Camp in 2015 where he is the artistic director and conductor. He conducted the Gala Friendship Concert (Malaysia & Korea) in Kota Kinabalu in 2015, collaboration between the Korean Opera Company Association and the JPO.

As a chamber musician, he plays viola in his Duos group. Yap Ling is also the violinist for the Three-in-1, MP3rio (Piano Trio), the Jesselton Trio (Oboe-Violin-Piano), Re:mix (Singaporean String Ensemble), the Malaysian Ars Nova Ensemble (String Quintet with Piano), the L’espressivo Trio (Vocal-Violin-Piano) and the Fuegokoori Trio (Violin-Cello-Guitar) which has performed regularly in various parts of Malaysia and abroad.

Besides giving regular recitals with his wife Grace Lee, Yap Ling has also appeared as soloist with the Monash Sinfonia in Monash University, Melbourne, Australia, the Penang Symphony Orchestra and the National Symphony Orchestra (Malaysia).  Apart from classical music, he was invited to perform with Jackfruit (Jazz Band) at the 10th Nanjing International Jazz & World Music Festival, China in 2011.

GRACE obtained her Bachelor of Music degree from Auckland University, where she studied piano under Professor Tamas Vesmas. She had conducting lesson with Uwe Groud and Karen Grill.

Grace is also an avid accompanist.   Some of the musicians she has accompanied includes the famous ‘Malaysian 3 Tenors’- David Ngim, Lim Cheong Hock and belated Armando Chin Yong, the Sabah based Soprano Phoon Sook Peng who sung for “The Yellow River Cantata” in KK, the Dama Vocal Festival held at KL Performing Art Centre and the Debut Season With Stars From Dama’s Production - “Intimate Encounters” in KL.

Her latest appearance was with her husband Yap Ling and cellist Lai Kong Loke giving a piano trio recital at Dewan Budaya Universiti Sains Malaysia, Penang in Three-In-1 on 12 April.

Yap Yen started the violin with Mr. Marcus Leong.  She is a violinist with orchestra RTM KL since 1992. She was the Concert master and frequently appeared as soloist for the orchestra which has performed  for various concerts in Malaysia and overseas.

In addition, she has also played with the Asian Philharmonic Orchestra in Korea and Japan, Harry Potter concert.

Transfered back to RTM kuching 2016 as the head of Music Department in RTM Sarawak,  Kuching.


He joined the Sarawak Symphony Orchestra during school years in Kuching as 1st and 2nd violin violinist under the baton of conductor Mr. Marcus Leong.

He made a fair amount of large and small performances and concerts during the years in Sarawak Symphony Orchestra where most of the musical experiences was gained and exposed to.


He obtained diploma on violin from Trinity College and joined the Panggau Libau String group with few other great musicians in Kuching before pursuing graduate study in IT field.During the early working years in Penang, he had joined the Georgetown Chamber Orchestra under the leadership and conductor Mr. Lai Kong Loke.

She has performed for many events include festivals, launchings, opening ceremonies, performance at the Prime Minister’s Residence and concerts abroad.  She is a member of the Prelude String Quartet, D’Arte Duo and D’Arte Ensemble.

Besides singing in the church choir, she is also an avid ballerina. Performances have taken her to many countries including Kazakhstan, Germany, Taiwan, China, Philippines and Hong Kong beside many places in Malaysia.

She has performed many times in Hong Kong with the Music for Our Young Foundation (MOY), involving in helping in their Outreach Program and playing the Butterfly Concerto with them. Recent performances include The Bach B Minor Mass Concert Tour of Sarawak and the University Sains Malaysia's concert - Musical Fantasy 'Unforgettable Symphonies' where she solo the Lalo's  Symphonie Espagnole. 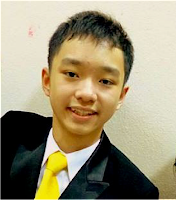 The son of Yap Ling, 16 years old Yap Yi has performed alongside his sister on the cello for launchings, opening ceremonies, performance at the Prime Minister’s Residence and concerts abroad. He is also the cello section leader for Jesselton Philharmonic Orchestra (JPO), the Kian Kok Strings Orchestra (KKSO), the Kian Kok Youth Orchestra (KKYO) and the Permata Seni Muzik (PSM).  He is a member of the Prelude String Quartet D’Arte Duo and D’Arte Ensemble.

He has performed in many countries including Kazakhstan, Germany, Philippines, Taiwan, China and Hong Kong beside many places in Malaysia.

Besides playing the cello, he is also passionate about art where 4 of his works were featured in the New Talent Exhibition 2015 at the Sabah Art Gallery for 3 months.

He has performed many times in Hong Kong with the Music for Our Young Foundation (MOY) and involved in helping in their Outreach Program. Not given to inactivity, he had just done The Bach B Minor Mass Concert Tour of Sarawak and the University Sains Malaysia's concert - Musical Fantasy 'Unforgettable Symphonies' 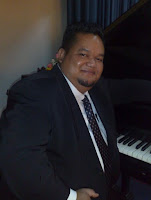 He is a Professional musician, music, arranger, music programmer and composer who works at RTM Kuching Sarawak. His primary instruments are Piano and Synthesizer

He has been a musician for more than 28 years. Started off with learning the violin and trumpet but finally found glued to the piano. Started learning the piano at age 8 with my mother and classically trained with three piano teachers ( Grade 4 – 5: Simon Sim, Grade 6 – 8: Madam Yap Chiew Phin, Piano Performance Diploma: Madam Geraldine Law (At IMH).

After Secondary school, he started to gain experience with KPSU and played for many private functions (Pop, Rock and jazz mainstream) with many music bands. In 1995, he pursued to Berklee College Of Music to study Contemporary Writing & Production, and Film Scoring. After 4 and a half hard years in the United States, he finally came back home to Kuching by the end of 1999.

In 2000, he left for KL to work with many musicians like Greg Lyons, Luis Pragasam, Hanafie Imam, and many famous musicians. He Has played in many Jazz Festivals at Mount Kiara and the most memorable gig that he ever had was the first Philips Jazz Festival in 2002. At the same period, he has done many musical performances in no black tie, the Marriot hotel and many other places. His personal favorite show was when they did a tribute to Sheila Majid in ICOM, 2002. The best part was when she sang her two songs which Eugene re-arranged ( Sinaran & Memori) and played for her.

Eugene Latest highlight with his Westjazz band was in Miri Jazz Festival performing a lot of Funk Electric with a variety of ethnic mixture. He is currently still building strong as a musician and based himself in his hometown so he could contribute to help improve the music industry in Kuching, Sarawak. 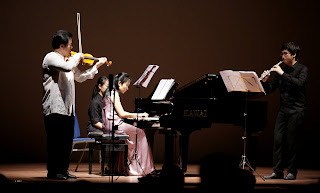 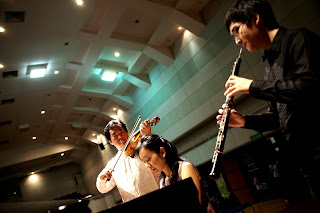 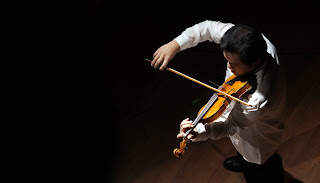 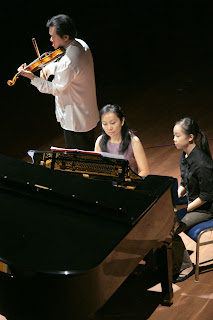